We are a company that sells video cameras. Obviously, a lot of what we do will be directed toward selling security cameras including, in some roundabout way, this very article.

Why You Need to be Rethinking Security Cameras

We are a company that sells video cameras. Obviously, a lot of what we do will be directed toward selling security cameras including, in some roundabout way, this very article. Although I work for A1 Security Cameras, I am not a salesman here. I started last year in a data entry and content creation role. Which basically means, I did not come here for the cameras! I knew virtually nothing about security cameras. Sure, I knew of them. I’d see them in public locations, nestled amongst rafters in restaurants, sometimes stuck outside a drive through, and occasionally I’d even see them on someone’s house. I know an old neighbor of mine had some, but I don’t think they faced his shed for I may or may not have acquired some of his wood in a manner that may or may not have involved asking first. Skateboard ramps vs. common sense, the former wins often in the mind of a kid. (Note: my friend broke his arm skating on that wood and I had a wheel come off while going down a steep hill the very next day. Karma finds a way.) 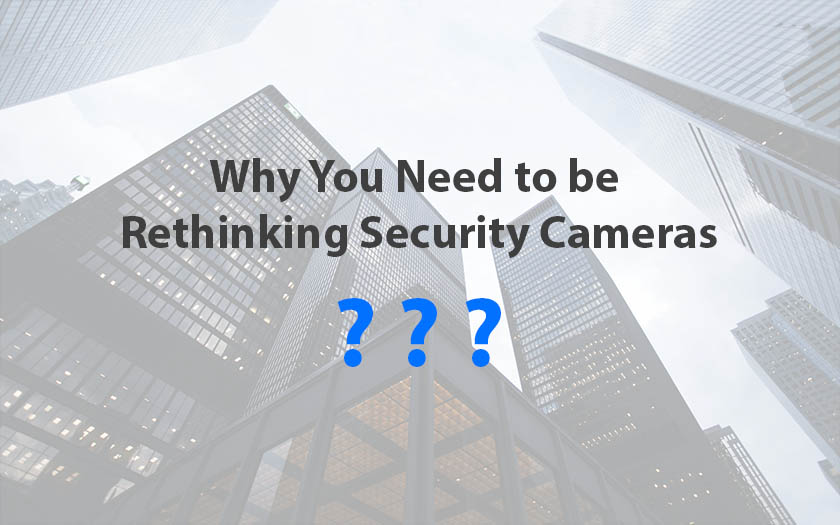 In adulthood, I still never really took account for what security cameras are. They show up in novels like 1984 as an oppressive force. In spy movies they’re often used to watch the bad guys or track a good guy gone rogue (Jason Bourne probably knows more about HD CCTV than he lets on; James Bond seems almost insistently oblivious by comparison, although he does drive much cooler cars). One thing is for sure – I made pretty base assumptions that cameras were,

Of course, working at A1 Security Cameras wizened me up pretty quick. If you look at cameras like I did, you’d never consider them for more than anything but watching warehouses and businesses and giant lawns in case of skateboarding ne’er-do-wells.

But the reality is that security cameras have a lot in common with the rest of 21st century technology: the gateway has been flattened and anyone can come through the door.

Ten years ago, I thought a flip phone was amazing. A phone that goes in your pocket? Incredible. And then smart phones emerged. Now we had phones with screens on them better than the T.V.’s in our living rooms. Okay, I’m sure some of you had awesome T.V.’s. Ours was 90% wood and had wool covers over the speakers. Actors sounded like they were being interrogated with burlap sacks over their heads.

But the point is that technology was rapidly advancing and readily becoming available to everyone. Smart phones have become so proliferate that up to 40% of people in developing or third-world countries own a smart phone! The rate of ownership went from 21% in 2013 to 37% in 2015, growing exponentially fast.

Security cameras have absolutely been a part of this technological renaissance.

Let’s look at some key things that surprised me about today’s security cameras.

They’re cheap as hell: security cameras can be found for incredibly cheap prices. Obviously, if you get a badass camera with all the bells, whistles, and a tank’s armor for a case, it’s going to dig deep into your wallet. But what if you just want something for your home? You don’t have to break the bank. Not only have cameras dropped to such ridiculously low prices (sub-$50 easily), the rest of the tools and accessories have, too. Video recorders are cheap as hell. And storage space? Remember when just one gigabyte was a big deal? I had a 9-gig hard drive about the size of a brick. Now they fit terabytes on thumb drives so small couch cushions are just waiting to eat them up. Storage space for video recorders is a complete non-issue. The prices are super low and the amount of space to be had is absolutely huge.

Installation is easy as hell: I’m technologically illiterate. The most I did before joining A1 Security Cameras is half-assedly construct a computer or two. I’ve melted CPU’s by accident and dropped air-spray foam right onto a hot motherboard. I’m not exactly the cool hand Luke you want around your hardware. But even I had no problems hooking up and installing a camera. A network camera literally requires one cable (Ethernet) and a video recorder to get things up and running. The hardest part, really, is the cabling itself.

Don’t let this happen to you.

The support is actually quite heavenly: the marketplace for cameras is fierce. Unbeknownst to many, there are some very, very big companies in the surveillance marketing competing for supremacy. And the battle is so fierce that there have been accusations of industrial espionage! So as you can imagine, these companies fight over customers. What is the best way to get and retain a customer? Service. What’s a lynchpin of service in a setting like the surveillance industry? Technical support. Cameras and video recorders come with incredible amounts of information on how to get things up and running. If you run into trouble, a simple phone call to tech support will get things squared away. The industry is no longer the Wild West where you gotta do everything yourself – there’s beaucoup amounts of help out there!

The community is enormous: one of the more interesting things about the Internet age is how it has spawned virtually countless communities for all sorts of things. If you can think of a subject, no matter how obscure and unknown, there’s almost certainly going to be at least a few people who have formed a group for it on the Internet. Online discussion forums have magnetized people of similar interests and security cameras are no different. Forums range from being specific to a product line to generalized discussions about the industry in a general sense. Either way, if you have a question or would like to connect with others who share similar interests, the Internet is has got it all.

There are tons of online communities for security cameras.

The versatility is surprising: cameras are typically seen in the light that they only view and record things. How crazy is that? It is, after all, what they’ve been doing since the start. However, security cameras have developed all kinds of little tools and gadgets to accommodate all sorts of settings and scenarios. For example, cameras can trigger on point-of-sales, instantly recording data whenever a sale is being made and a register is put in use. Cameras can track and count people, identify lost items, and be set up to trigger whenever someone crosses a digital boundary. Because storage space has gotten so cheap, it’s very easy to record for very long periods of time without needing a large, over encumbering system to back it up. Technologies like Night Vision provide super crisp images even in dark settings, giving even the simplest and cheapest of security cameras the ability to record day or night.

The security can be taken anywhere: I mentioned earlier that security cameras were keeping up with the technological leaps and bounds occurring elsewhere, and the usage of apps to watch your surveillance on the go is no different. with the development of smart phones has come to the development of a ridiculous number of apps for all manner of needs. Security cameras carved out a very busy, very competitive niche in this app marketplace. These apps allow you to view your surveillance system no matter where you are in the world. You do not need to be the security guy staring at a dozen screens to keep watch of your cameras – virtually all of it can be done on your phone.

We’re seeing a growing commonality to security cameras. Hell, we already know that vehicle cameras are incredibly popular in places like Russia and Brazil (as a nearly society-wide means to counter insurance scams). Essentially anyone can dip their toes into the market one way or another. It’s no longer a question of experience, technical aptitude, or even budget. A broke college student could get a surveillance system up and running if they so wished (use that intelligence to protect the knowledge!).

It does seem a little self-righteous to say you need to be rethinking security cameras just because my ignorant ass learned something new. If you think that way, good. You’re ahead of the game. But many probably don’t realize how the entry point for cameras has basically hit rock bottom. We highly endorse the view that the everyday man or woman should think about security from a different perspective. That does not mean going to a box store and purchasing some cheap equipment that’s only there cause a company bought their way into the shelf space. We’re talking legit manufacturers who have long histories of excellent customer service. We’re talking the same companies that service major businesses, having the tools to give outstanding cameras to those blokes sitting in first class, as well as us folks they use the curtain to keep away.

So do try and rethink security cameras because, like with phones, most of the world already has!