ACTi July 2016, What’s Coming and Things to Look Out For

An update to the NVR

A new feature comes to the ACTi NVR software – embedding webpages into the live view layout. This allows users to setup proper responses to alerts and triggers. For example, if a fire were to break out, then a live webpage could be presented with the predetermined set of actions readily available to be activated.

There’s plenty of interesting tech news coming out of ACTi this time of year.

To kick things off is the Q14 and Q112 Pinhole Camera Models.

With the way security is moving forward, most people are looking for discretion and secrecy in their recordings. Covert recording is about a lot of things, but what most interests people is the ability to record those who don’t know they’re being recorded.

You need to think of security surveillance as a sort of arms race. As security cameras become more ubiquitous, criminals begin to take action against them. Common reactions are cutting cords, spray painting the cameras to obscure their recordings, and simply destroying them altogether. How do you avoid all of this? With covert cameras, of course. A criminal can’t destroy the most central piece you have on hand – the recorded footage of them in the act – if they don’t know they’re being recorded.

ACTi’s covert cameras can be easily stored in places like plants, tissue boxes, or masked as fire alarms and other little innocuous items that might be littered about a household. 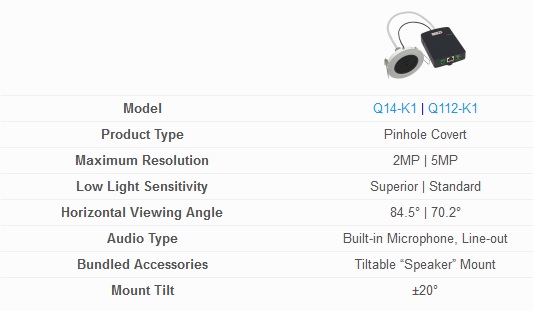 And click here to check out the Q112-K1 camera.

ACTi’s MNR-320P and MNR-330P are the new standalone NVRs certified specifically for outdoor and mobile use – hence the term, ‘ruggedized.’ These bad boys are designed to handle being driven out to remote locations. They come with vibration and shock resistances. So, for example, if you’re working in an oil field, this thing would be great for driving out to the trailers and derricks without the need to worry about if the thing will be working when you get there. Of the two, the MNR-330P has the more powerful CPU, allowing for more computing power in handling analytics and smoother live feedback. More processing power, in general, also translates to better reliability, something that’s critical if you’re working on very serious projects where one cannot afford to have any technological hang-ups.

The following items are now discontinued: