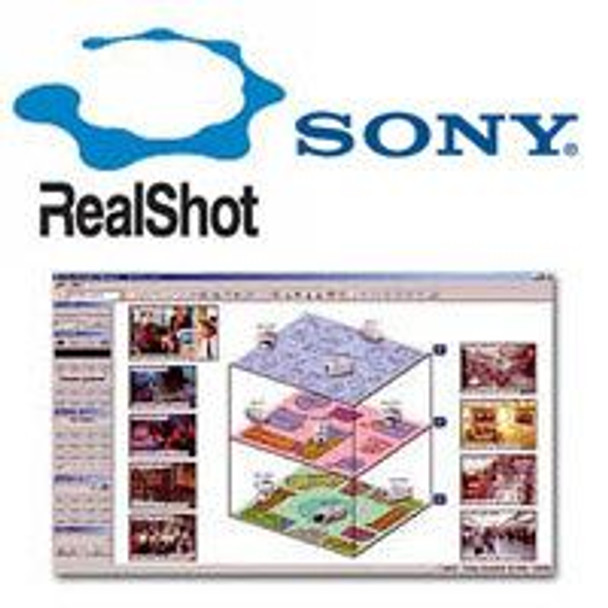 Sony introduces the IMZ-RS409 Realshot Manager V4 Series Intelligent Monitoring Software, which incorporates intelligent video analytics - “Video Motion Filter Alarms″ and “Video Motion Filter Searches″ - using metadata to provide operational efficiency and a high level of security.
“Video Motion Filter Alarms″ allow users to define rules to trigger alarms on live monitoring/recording so that crucial events are easily called to the attention of the guard and/or recorded. “Video Motion Filter Searches″ allow users to define search criteria so that events of interest are easily searched for in the recorded information.
The flexible Sony Realshot Manager V4 IMZ-RS409 Series is the perfect software solution for small to enterprise-class IP video Surveillance monitoring environments using Sony IP network security cameras. Either as a standalone system or in a client/server configuration, this easy-to-use software is an ideal control center for multi-camera monitoring.
With its intelligent value-added features and system scalability, Sony IMZ-RS409 NVR software Series is ideal not only for use in security applications, but also for use in process/quality control and market-research applications to build a smart and powerful multicamera video monitoring system.

Sony IMZ-RS409 9ch NVR Series, which incorporates intelligent video analytics, is a key part of Sony IP Network Video surveillance solution based on the Distributed Enhanced Processing Architecture (DEPA) platform. The application software works in conjunction with the Intelligent Motion Detection (IMD) and Intelligent Object Detection (IOD) functions of Sony DEPA-enabled Network IP Security Cameras (SNC-RX550, SNC-RZ50, and SNC-CS50).
The DEPA solution architecture is designed so that IMD and IOD functions are performed by the IP network cameras and the metadata generated is sent to Sony IMZ-RS409 Series NVR software. Objects are detected then analyzed by the software using filters or rules to generate alarms. This method of distributed processing minimizes the server workload, network bandwidth, and storage capacity, while making the system more stable and efficient in comparison with conventional video analysis systems.

Intelligent Video Motion Filter Alarm Users can define parameters (set filters) for use in conjunction with the IMD and IOD functions of Sony DEPA-enabled IP network cameras. Up to six filters or rules can be used to limit alarm triggers to specific object movements or situations. In addition, filters can be defined with more detailed parameters to trigger alarms based on object size, direction, and/or speed to exclude objects that are not supposed to trigger an alarm.

The IMZ-RS409 Sony Realshot Manager version 4 Series features a built-in Intelligent Motion Detection function that can be used to trigger an alarm or perform a variety of other actions such as locking doors or turning on lights. Using a Sony advanced algorithm, the system can minimize false alarms from video, ie AGC noise or enviromental 'noise'.

Sony IMZ-RS409 9ch Network Video recorder sofiware features an intuitive and user-friendly GUI that can be personalized to suit the user's own requirements and preferences. The “Layout Editor″ is a powerful feature that creates customized site layouts and allows the user to insert backgrounds (e.g., a floor plan or campus layout), icons (that can be associated with a specific camera or monitor), and company logos.

A specific window in multi-camera view (i.e. a larger window within the multi-camera window), can be assigned as the “Hot Spot″ area, or a second monitor may be used for this purpose. The “Hot Spot″ area is used to display an image of interest to get a more detailed view - this image can either be manually selected or triggered by an alarm.

Sony Pan/Tilt/Zoom (PTZ) IP network security cameras can be controlled remotely over a network using the IMZ-RS400 Series software. When a point in the image is clicked, the camera automatically pans and/or tilts to make that point the center of the image. And by clicking and dragging out a specified area of the image, the camera will zoom in to that area.

Sony IMZ-RS409 Series supports bi-directional audio. When used with Sony network cameras configured with a microphone, the software can accept and process incoming audio. What‘s more, when the camera is configured with speakers, the IMZ-RS400 Series can be used to make live announcements at the camera site.
Flexible Recording Manual Recording With the IMZ-RS400 Series, when manual recording is set, authorized users can initiate a recording at any time for any selected camera. Images from the selected camera are then recorded at the user-defined refresh rate, resolution, and picture quality.

This mode allows users to schedule their recording for any selected camera or group of IP cameras. There is virtually no limit to the number of scheduling combinations that can be selected - simply adjust the refresh rate, resolution, and picture quality to record the detail the user wants, when they want.

Sony Realshot Manager IMZ-RS409 NVR software supports Alarm and Pre- Alarm recording, which automatically records images immediately prior to the alarm trigger. Alarms can be triggered by devices such as external sensors or the built-in motion detection functions of Sony network cameras.

Filters that are used for monitoring and recording images from Sony DEPA-enabled cameras can also be used during searches. This allows users to quickly and effectively retrieve images. For example, a “virtual borderline″ can be drawn to search for individuals entering restricted areas, or “virtual areas″ can be set to search for images of items that have been either damaged or stolen. This allows operators to pinpoint desired search images and to drastically cut down the review/audit times after an event of interest has occurred.

The Search Recording function of the IMZ-RS409 Series allows the user to quickly locate a particular recording. The calendar displays all recordings made (per camera or camera group) so the operator can see when and what kind of recording was made. The user can then filter these recordings by time/date, inserted comments, and/or alarm events. Alarm events can be designated from sensor inputs, motion detection results (camera or software), and motion filters. In addition, thumbnail preview images can also be displayed to make searching even easier and more effective.

Recording and playback can be performed simultaneously with Sony IMZ-RS409 Series. Not only can previously recorded images be viewed, but images that are currently being recorded can also be viewed while recording. Simultaneous Playback With Sony IMZ-RS409 Series, users can simultaneously play back recorded images from multiple cameras, providing quick and efficient operation. For example, a group of cameras covering a specific area can be played back simultaneously to see events from different views, or adjacent cameras can be played back to see the path of moving person or vehicle.

With the IMZ-RS400 Series, users can generate an exportable file with embedded data that includes the camera name and date-time stamps. These files can then be exported in the standard AVI file format for easy exchange with other applications. Note: Only Video can be exported, export of Audio not supported.

With the Realshot Manager IMZ-RS409 Series, sophisticated security functions are incorporated in the software to help manage multiple users. The administrator can define user groups, add users, set privileges per user/group, and set up user access to specific camera groups.

An API for application developers or system integrators is offered with the IMZ-RS400 Series, allowing the software to be integrated with other application programs or systems such as GUI design software, POS (Point of Sale), access control , and alarm systems.