Quickly after the company’s founding in 1957, Pelco has been developing some of the best CCTV hardware seen in the surveillance industry. Most notably recognized for their IP cameras, panoramic cameras, and PTZ cameras, Pelco security cameras come in many designs with features that adapt them to a wide range of environments. Such features also include Onvif compatibility, remote streaming, reliable Ingress Standard ratings, wide dynamic range, and many more of the popular features found in today’s surveillance. While, in some cases, Pelco security cameras can be used for residential use, these CCTV products are much better suited for commercial and industrial use. Moreover, whether you need them for your warehouse, construction site, industrial zone, small business, or commercial business, purchase your Pelco security cameras from A1 Security Cameras today! 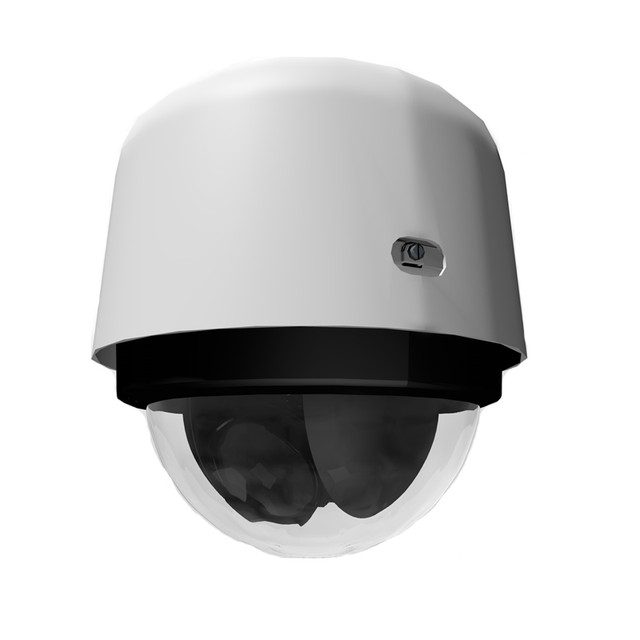 As they are CCTV cameras designed by one of the industry leaders in surveillance, each Pelco security camera comes with a wealth of features specific to its intended environment. So whether you need them for your small business, massive multilocation company, education, industrial purposes, construction sites, or any other place of business, it is more than likely this brand has developed Pelco security cameras for you. Furthermore, as a company that has been developing CCTV solutions for over 50 years, Pelco has created innovative solutions that you can add to your personal security measures.

Adaptive IR: A specific form of night vision found in Pelco security cameras like the Sarix, adaptive infrared allows for an enhanced view in low light or after dark. While the system needs configuration by the user for the best results, this technology can keep your business secure inside and out, thanks to the impressive range found in the built-in infrared lights. Such a feature has been widely adopted in some form or another in the vast majority of modern Pelco CCTV cameras, with many sporting additional features to complement the function. That means these products are just as good for general outdoor monitoring day or night while also being perfect for indoor surveillance focused on product storage, machinery protection, policy adherence, and more.

Optical Image Stabilization: Similar to the technology found in AXIS cameras, Pelco has outfitted many Pelco security cameras with technology that stabilizes the CCTV device so that your recording is not affected by vibrations, shakes, and often a good range of motion that may occur. While common in many lines of cameras like Sarix, Esprit, and Exsite, the function is most often implemented in Pelco security cameras with advanced motorized zoom and sensitive infrared sensors. CCTV products with this function are most often beneficially deployed in industrial zones, stadiums, toll roads, instances of open-air surveillance, and more.

Pelco Advanced Analytics: In a basic format, most modern Pelco security cameras feature advanced video analytics that causes the surveillance apparatus to more intelligently view an environment beyond just viewing and recording. Adding to basic functionality, Pelco security cameras with advanced analytics can determine if a moving object is a human, animal, or vehicle. The software can set zones for alerts if someone enters a specific threshold, displays strange behavior, or remains idle in somewhere determined for work or off limits. Accomplished through Pelco’s VideoXpert, users can be alerted to threats their surveillance detects and act far faster than ever before in the interest of safety or policy adherence.

Special Modification Requests: A particular service rarely presented by other brands in the surveillance industry, Pelco’s special modification requests or SMR program allow you to further customize your Pelco security camera to its environment or your specifications. This does not only include specialized exteriors for harsher temperatures, interference from pests, and more, but your cameras can also be fashioned to match textures, colors, and even materials. That means if you have a distinct interest in keeping your surveillance as concealed as possible whether hidden or in plain view, Pelco has a solution for you!

SureVision: When it comes to getting the best possible view from your CCTV system, there are several features to look out for in each option. Pelco security cameras make the search exceedingly simple by combining three of the most popular features into one technology. SureVision, as well as the later SureVision 2.0, combines true wide dynamic range, anti-bloom, and advanced low-light capability to make each Pelco security camera far more capable in any environment. Tested by IPVM, the technology proves to be impressive in commercial and industrial applications. Whether it is used in normal or stressed environments, surveillance with SureVisionn allows for better video footage quality all around.

Where are Pelco cameras made?

According to Pelco, the company develops products in the United States while featuring handling manufacturing in Germany, Taiwan, and the United Kingdom. Based in Oklahoma and owned by Motorola Solutions, at the time of writing, the brand still proudly displays where each product is made. However, in 2010, Pelco did establish a manufacturing base in China to supply and conduct business with the Chinese populace.

Do Pelco security cameras have microphones?

When a Pelco security camera is labeled vandal-resistant, the product typically features a microphone for taking in noise from the surrounding environment. While not guaranteed to be included unless specified, as A1 Security Cameras does in each product description found on each product page. It should also be noted that audio is much more common in IP cameras, but is not necessarily common throughout the industry due to the liability audio recording inherently brings. We suggest double checking products you are considering before purchase when you are interested in one-way or two-way audio in your CCTV.

What is Pelco D Protocol?

What is Pelco P protocol?

Alternative to the Pelco D protocol, the Pelco P protocol similarly allows for control of PTZ cameras and is used industry-wide.

What is the difference between Pelco D and Pelco P?

Pelco P is the older of the two while it features a capacity of 32 cameras and is viewed more as the basic version of the two protocols. Pelco P features a capacity for 256 security cameras while also providing additional commands for multiple different options available in each camera or the entire system. There are further differences between the two, but they are far more advanced in technical language.

How do I reset my Pelco camera?

All Pelco security cameras feature a reset button within a recess that can be reached via something like a paperclip. The button is generally along the rim or on the back of the camera, it is defined by an R or Reset. Hold down this button for ten seconds before releasing and waiting for your device to reboot. While you will need to reconfigure the camera, it should be successfully reset.

How do I set my Pelco camera to default?

Pelco makes reverting your Pelco security cameras to default settings far more straightforward than other surveillance options simply by way of using the reset button. Alternatively, Pelco PTZ can just as easily be reset by accessing the PTZ menu, clicking through Dome Settings, then toggling clear before clicking Restore Factory Default. The Pelco CCTV product should then be restored to its original settings.

According to Pelco, 100% of Pelco security cameras and CCTV products offered in the United States adhere to NDAA restrictions. In addition, while the brand does manufacture products in China, it does not transport that merchandise outside of the country as it is intended to cater to citizens of China.

With so many designs and features that arise out of the wide range of Pelco security cameras, choose A1 Security Cameras to plan a system that makes the most out of each CCTV product. Our team of experienced technicians can develop a detailed plan for your commercial business or facility so that you can both get the most coverage possible from your surveillance while also getting the best benefits possible. All features like video analytics, motion detection, night vision, and more are considered along with the best possible placement of each piece of CCTV hardware. Contact the A1 Security Cameras design team to begin the process and get surveillance that's right for you!

On top of system design, get the most out of each Pelco security camera by choosing A1 Security Cameras to make the installations in Dallas Fort Worth. Our technicians have earned years of experience serving businesses large and small with the best possible service available. Along with the installation of an entire system, we also offer upgrades, system integration with other systems, assistance with configuration, suggestions for professionals on high voltage or network integration, and more. Schedule your appointment with the A1 Security Cameras installation team today!