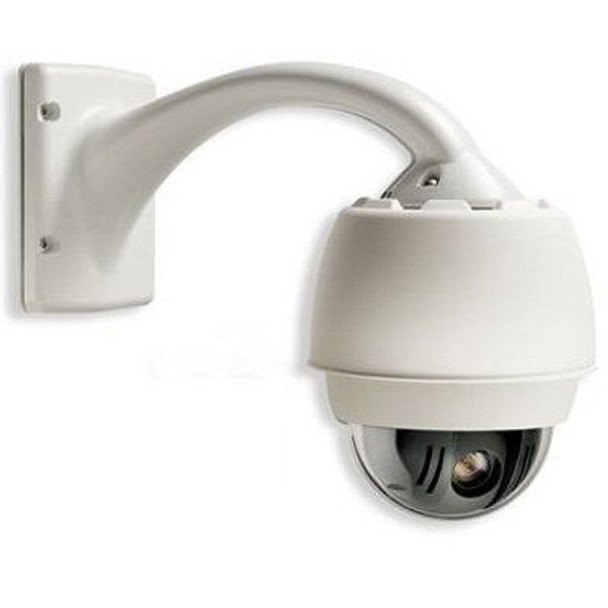 Bosch AutoDome modular security camera system is a revolutionary new concept in dome cameras. More than just a series of cameras, it’s a dome platform built around a system of intelligent, interchangeable modules that allow you to update camera functionality quickly and cost effectively. Using common components lets you install a basic camera system today and migrate to a more advanced version tomorrow - without having to replace the entire dome, thus protecting your initial investment.

The entire AutoDome security camera system is based on five& interchangeable modules: the CPU, camera, housing, communications, and power supply. Simply swap one of Bosch AutoDome’s interchangeable modules and quickly upgrade from analog to IP, color to day/night, or add motion tracking. Never before have you had the ability to adapt a security system to your changing needs this quickly or inexpensively

By using the same housing components, all installations have a consistent look, and observers have no idea which type of camera (if any) is watching over them. This unique, modular design also gives you the flexibility to move cameras between different housings when special coverage is needed, or as site plan requirements change. For example, an 18x PTZ camera over a specific area could easily be “hot-swapped” to a 26x day/night without removing the power.

Migrating from a basic dome to one with advanced features such as AutoTrack II intelligent tracking can be done quickly and easily, without requiring dome removal or rewiring. AutoDome’s Ethernet communications module allows you to add IP functionality while maintaining connectivity to
existing analog inputs and outputs.

Bosch AutoDome 200 Series is an economical, high-speed dome camera that uses a high-performance, 18x color PTZ camera. The 200 Series supports a variety of standard and optional video and data transmission methods, including Bilinx (over coax and UTP), fiber, and even TCP/IP over Ethernet. Remote control, configuration, and firmware updates can also be performed over these cables, offering you unparalleled control of your security cameras.

The optional IP Communications Module has hybrid functionality to protect your current analog technology investment while providing a clear and stable migration path to fully digital, IP-based solutions. This allows you to move to IP video at your own pace - all at once or one camera at a time. And since all AutoDome modules are completely interchangeable, there is no need to replace expensive components (for example cameras) or laborintensive components (for example mounts and housings).

The following are some of the features that make the AutoDome 200 Series the most flexible PTZ dome camera systems in the security industry.

Bosch AutoDome 200 Series PTZ color cameras have a 1/4-inch color CCD. With 470/460 TVL (NTSC/PAL) horizontal resolution and sensitivity down to 0.5 lux, the 200 Series offers exceptional performance at an affordable price. A rugged motor with fewer moving parts mean the 200 Series uses less power and is extremely reliable, making it ideal for high-usage applications.

With super-quick, 360° per-second pan and tilt speeds, the AutoDome 200 Series outperforms other domes in its class. As with all AutoDome Modular PTZ Camera Systems, the 200 Series includes Bosch patented Auto Scaling (proportional zoom) and Auto Pivot (automatically rotates and flips the camera), so tracking a subject is effortless. The 200 Series supports 64 pre-positions and a single preset tour. The preset tour has the capacity for up to 64 pre-positions with a configurable dwell time between pre-positions. Supported menu languages include: English, French, German, Spanish, Portuguese, Italian, Dutch, and Polish.

Optional hybrid connectivity allows the AutoDome to simultaneously stream IP video across a local or wide area network, and CVBS video via coaxial cabling to support existing analog equipment. Network video streams are sent over IP networks and can be viewed with Bosch DiBos Digital Video Recorder, or on a PC running VIDOS video management software. Alternatively, a Bosch IP video decoder can be used to display the video on an analog CVBS or VGA monitor. For maximum accessibility, video can be viewed using a Web browser. The BNC connection provides direct input to a conventional analog matrix switcher or DVR, further enhancing AutoDome’s viewing and recording flexibility. Hybrid operation allows simultaneous dome
control over the network and via biphase analog controllers.

Boschrsquo;s innovative tri-streaming feature enables AutoDomes equipped with the optional IP Communications Module to generate two independent MPEG-4 streams and a JPEG stream simultaneously. This feature allows you to stream high-quality images for live viewing while recording at a reduced frame rate, and at the same time, stream JPEG images to a remote PDA device.

The AutoDome camera system builds on Boschrsquo;s 10-plus years of experience designing and manufacturing dome camera systems. All AutoDome pendant housings (indoor and outdoor) are rated to provide IP66 protection. Outdoor EnviroDome housings provide an operating temperature range down to -40°C (-40°F). The optional “XT”extended temperature kit allows AutoDome to operate in temperatures down to -60°C (-76°F), ensuring reliable operation in even the harshest environments.

All housings come standard with a rugged polycarbonate bubble, recessed set screws, and a recessed bubble latch to reduce the chance of damage from vandalism. Inside the dome, the power, data, and video are all protected against unexpected surges of power.

Ease of installation and servicing

Boschrsquo;s innovative software, the Configuration Tool for Imaging Devices (CTFID), allows operators or technicians to control the PTZ, change camera settings and even update firmware from virtually anywhere without need for additional wiring. For the new Ethernet versions, an embedded Web server lets the installer access all the user settings, make camera adjustments, and update firmware via a standard Web browser.

The AutoDome’s innovative design simplifies installation and servicing. AutoDome reduces maintenance costs because you can replace individual modules instead of entire camera assemblies. Simply pop out the old module and slide in the new: it’s almost as easy as changing a light bulb. All tethers have been replaced with hinges, making installation and servicing safer and easier. You can even access the built-in power supply without taking down the dome.

Bosch AutoDome 200 Series security camera has advanced, built-in diagnostics to simplify service and minimize downtime. Using the On Screen Display (OSD), a technician can quickly and easily check critical parameters (such as internal temperature and input voltage level) to verify that the dome is functioning within acceptable operating limits. If video is not present, a local inspection of three diagnostic LEDs at the camera site can identify the presence of video and control data.