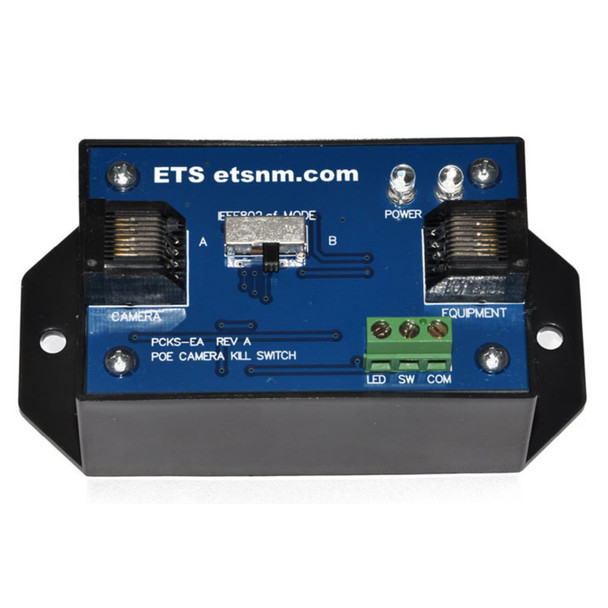 The PCKS-EA is a device designed to interrupt power and streaming of data from a PoE IP camera for privacy and confidentiality purposes. The PCKS-EA is 10/100M data rate compatible and mechanically makes / breaks data lines 1,2,3 and 6 with relays.Typical applications are in interview rooms, interrogation rooms, hospital rooms and patient exam rooms. The PCKS is placed in-line with the camera's CAT5 Ethernet cable. The PCKS is designed to be used with our RRSG rocker switch plate or RKSG key switch plate. When the switch is in the 'on' position, the LED on the RxGP is lit and the IP camera is connected to the Network switch. When the switch is placed in the 'off' position, the camera is disconnected. The RxSG switch connects to the PCKS-EA via a user supplied 3 conductor cable. Supports 10/100M data rates

The PCKS-EA is typically mounted near the IP camera but can be located any place between the camera and the network switch.

The PCKS-EA is placed in-line with the CAT5 connection that normally connects to your IP camera. Two standard CAT5 Ethernet cables are required.

Run a 22 gauge, 3 conductor cable between the terminal blocks of the PCKS and the RRSG or RKSG switch plate. This cable can be up to 1000’ in length. See diagram below for connections.

The PCKS-EA supports Both Modes A and B of IEEE802.3af POE. The PCKS-EA is pre-configured for the most common use of the "end point" POE IEEE802.3af standard (mode A). If the power LED does not illuminate in this position, try the mode B position.