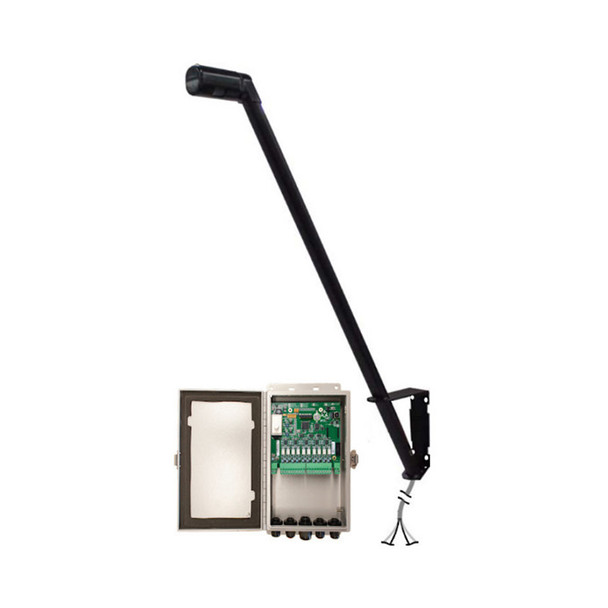 The Senstar LM100 is the world’s first 2-in-1 perimeter intrusion detection and intelligent lighting system. Combining high performance LED lighting with accelerometer-based sensors, the LM100 deters potential intruders by detecting and illuminating them at the fence line.

Optimized for use with camera surveillance systems, the Senstar LM100 provides localized, uniform lighting along the fence line. Uniform coverage lets cameras operate with a higher dynamic range, ensuring objects and people are illuminated while avoiding the generation of dark silhouettes in front of bright backgrounds.

The LM100 has a Color Rendering Index (CRI) of 70+. Its full-spectrum illumination accurately renders color, bringing out critical details that enhance identification and pattern recognition (in comparison, the high pressure sodium lamps commonly used in other security lighting products have a CRI value ranging from 20 to 50, resulting in flat, washed-out colors).

Each Senstar LM100 luminaire includes a built-in accelerometer to detect attempts to cut, climb or lift the fence fabric. When networked, the LM100 reports intrusion attempt locations to the site’s security system to enable a directed response. Early detection at the perimeter means the LM100 can trigger warnings and alarms, cue up camera systems, and even provide an instant, visible deterrence like enabling or strobing the fence lights within the immediate area – all while the intruder remains outside the building or protected area.

Targeted illumination along the fence line and warm-light option minimizes light pollution, enabling the Senstar LM100 to be used near light-sensitive areas, including airports, residential housing, and nature preserves.

The Senstar LM100 gateway provides 10 individually configured input-output (I/O) ports that enable integration with a wide range of site security devices and alarm systems. For example, lighting behavior can be controlled by external devices, including access controls, light sensors, and other security devices. The LM100 can also activate additional deterrent devices such as sirens or additional lights, trigger on-site security cameras, as well as interface directly with most alarm panels.

In a networked system, the I/O ports may be monitored or controlled by the SMS. The number of I/O ports can be increased by adding a relay output or input card, each of which provides four additional ports.